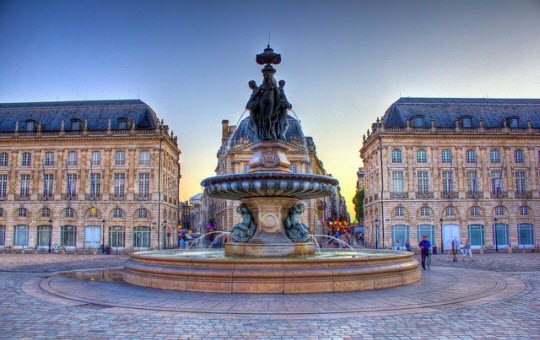 Bordeaux is a famous tourist city in France. This is one of the largest urban area in fact contains more than 2 lakhs of population. Bordeaux has its major wine industry name for it specifically in France. It has contemporary art museums starting from early days. Some of the top places in Bordeaux will be Gallien palace, Market capuchin, cathedral, wine school and many that are not enough to be listed.
The most famous saint-Catherine street is the place not to be missed where shopping is enormous with amusement. Climatic wise Bordeaux is meant to be oceanic with little warmth in summer and mild cool in winter time. The wine was introduced to the Bordeaux region by the Romans, probably in the middle of 1st century, to provide wine for local consumption, and wine production has been continuous in the region since then.

It starts out from the main Tourist Office in the centre of Bordeaux (A), housed in a building that is an interesting example of neo-classic architecture. A stone’s throw away, the Place des Quinconces is on the site of the former Château Trompette reconstructed by Louis XIV after the Fronde. This is overlooked by the Girondins Monument (B), a unique example of 19th century French civil architecture.

Along with the Grand Théâtre (D), the Cours du Chapeau-Rouge (X.Y.Z) is undoubtedly the most “royal” street on this circuit, epitomised by buildings in a textbook neo-classic style. Opening onto the river, 18th century Place de la Bourse (S.W) was Bordeaux’s first major urban project. Built in 1730, it was the first of many far-reaching transformations and became the centre of a new district. Continuing along the quays, one comes to the Porte Cailhau (N.0), a Renaissance triumphal arch constructed in 1494 in honour of King Charles VIII. Memories of the Middle Ages are kept alive in the Saint-Pierre district, where the street names reflect their Anglo-Gascon origin. The culmination of this tour, the Grosse Cloche (L), symbolises municipal authority and features the city’s medieval coat of arms.

Located in a pedestrian precinct since the tramway was introduced, Saint- André cathedral and Pey-Berland Tower (J) are two complex and attractive monuments. Going towards Place Gambetta (H), the Palais Rohan (I) on your left was the former archbishop’s residence and became the Town Hall in 1835. The courtyard and garden are very attractive. Along the way, sumptuous town houses and imposing residences with monumental doors and harmonious facades show the scale of the urban renewal project undertaken by royal intendant Tourny and his successors. Bordeaux had changed so much by 1757 that a Swede, Hallman, wrote to Linnaeus: “Anyone who has not seen this city for a few years would now find it unrecognisable”. This transformation continues today, but with utmost respect for the past.