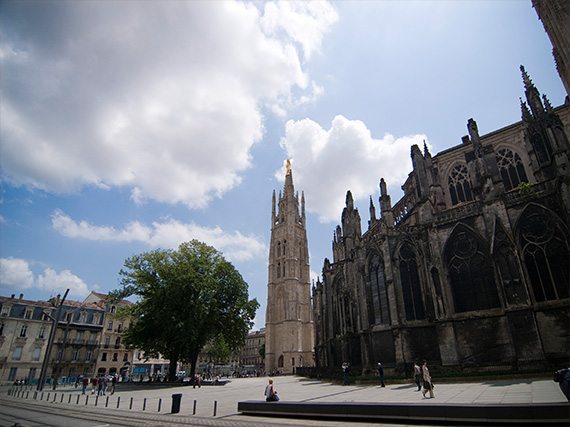 Bordeaux Cathedral (Cathedral Saint-André de Bordeaux) is a “Roman Catholic cathedral”, seat of the Archbishop of Bordeaux, located in Bordeaux. The church was consecrated by Pope Urban II in 1096 of the original Romanesque edifice, only a wall in the nave remains. The Saint-André cathedral at Bordeaux is an imposing Gothic edifice located in the heart of the capital of Aquitaine.

It is the largest religious building of Bordeaux and has been honoured by UNESCO as a World Heritage site. The Royal Gate is from the early 13th century while the rest of the construction is mostly from the 14th to 15th centuries. This building is a national monument of France.

In this church during 1137, the 13-year-old Eleanor of Aquitaine married the future Louis VII, a few months before she became the Queen. A separate bell tower that is Pey-Berland tower is next to this cathedral. The site is served by line A and B of the tramways of Bordeaux station at the stop “Hotel de Ville”.

The Cathedral is home to the Marcade collection, which consists of a group of 42 illuminations, among other objects like paintings, sculptures, liturgical vestments and silver objects. It was decided to the Cathedral of Bordeaux by canon Marcade in 1947. Of note, these illuminations, little studied so far, will be exhibited at the beginning of 2015 in the cathedral, in a room specially designed for this collections.

This Cathedral is a huge building with a great feeling of vastness. The visitor will get a fantastic view of the exterior, especially of the roof, from the bell tower next door. Well worth a visit! It’s obvious that it does not look like cathedrals of Ile de France. Difficult for her to compete Amiens, Chartres or Reims, however, its heterogeneous appearance has something unexpected and endearing particular by its separate bell steeple. Its walls have seen in 1137 the marriage of Eleanor of Aquitaine and Louis VII, the future King of France and five centuries later, the union of Anne of Austria and Louis XIII.

At the time of the Revolution will become a store fodder sad destiny for this monument had to endure a devastating fire in the 19th century. So that his furniture was reconstituted with other churches remains.

The royal gate opened in the north wall of the nave with its style evokes the heyday of French Gothic thirteenth century. Its restoration has resurrected its original appearance. Indeed, like many other cathedrals sculptures were painted in bright colours to better achieve the imagination of the people. Bordeaux Cathedral is historic Monument and World Heritage Site by UNESCO since 1998 as well as the Basilica Saint-Michel and St. Seurin Basilica.

The old cathedral said to be in ruins by the end of the eleventh century. Work began with the radiating chapels leaving the old chorus intact, the burial of “Archbishop Simon de Rochechouart”. Peace and prosperity of Bordeaux made possible by the 1259 accord of Paris. Wealth generated from the production of wine and textiles and even trade. The construction of that chorale was also helped by the support of Pope Clement V.

“The Saint-André cathedral” at Bordeaux is an imposing Gothic edifice located in the heart of the capital of Aquitaine. This is the biggest religious building of Bordeaux and has been listed by UNESCO as a “World Heritage site” since 1998.